At a conference on applied psychology in Eindhoven I became interested in the minor Sports and Performance Coaching. I decided to do this minor because in Belgium there is no possibility to study Sport Psychology. I like sport and would like to combine practice with theory in a sport profession. The minor was divided into two periods. First we learned about coaching the individual athlete in goal setting and inner vision. As a mental coach I coached a volleyball player. In the second period we learned about coaching in team sports. I coached an indoor football team in competences such as leadership and talent. The guidance and support we get from our coordinator and teachers is great. They love what they do and that enthuses. I was also supported in choosing the right subjects for my study. I was surprised by meeting a lot of international students. I thought because I speak Dutch (I am Flemish) that I would meet a lot of Dutch students. The city of Eindhoven and its student life are great. The city is not too big. I liked visiting the outdoor expo GLOW and of course the nightlife at the Stratumseind. The Tipsy Duck was a favourite meeting point among the Erasmus students. I lived with three other international students in an old not so well maintained student house five minutes from the centre. For transport I often used a bike, a favourite way of transport in the Netherlands. I like this Dutch habit. The Dutch openness I liked as well, despite the clichés that exist about them. This foreign minor has helped me develop a lot as a person, socially and academically. The things I learned and experienced during this minor are valuable for the future and will stay with me forever, that’s for sure. I am definitely going to miss the people I have met. Fontys is a well-developed university with a good educational structure, buildings and facilities. 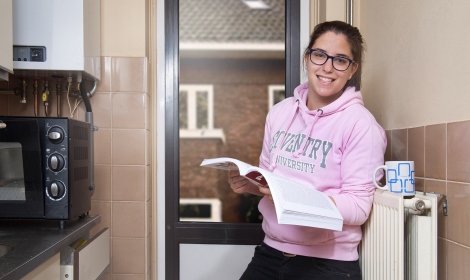