Since September 2007, Marcel Andriessen has taught classical percussion at the Fontys Hogeschool voor de Kunsten in Tilburg. Beyond providing a solid technical and musical foundation for his students, his primary goal is to support them in finding their own musical identity. During the four year bachelor course, he encourages his students to develop a personal taste and style, so that they are prepared to continue their studies at the Masters level, where they are given the resources to further develop into a successful musician. In addition to teaching percussion, Marcel also works as a study career coach in the Master of Music program. Marcel studied classical percussion between 1984 and 1993 at the Hilversum Conservatory under the instruction of Victor Oskam and Nick Woud. During these studies, he was particularly interested in contemporary music and musical theater. In 1990, he was asked to join the European tour of “Antigone,” a music-theatre performance by Belgian composer Luc Brewaeys for 8 singers, 2 percussionists, and tape. This tour was also the genesis of the percussion duo Konink&Andriessen. With this duo, specialized in contemporary music, Marcel played many stages both in Holland and abroad, and premiered compositions by, among others, Luc Brewaeys, Phillippe Boesmans, David Dramm, Jan Bus, and Harry de Wit. This repertoire is recorded on the CD “Notes ’94”.

Since 1993, Marcel’s professional focus is in contemporary music and (music) theatre. As a freelance percussionist, he has played with a wide range of musical ensembles and theatre troupes in venues throughout the world. On a few occasions, like with Dogtroep and Jan Fabre/Troubleyn, Marcel has also been challenged to perform as an actor. Between 1998 and 2012, Marcel was a regular member of Slagwerk Den Haag. This experimental percussion group focuses on collaboration between musicians and composers. Often, projects involve inventing entirely new instruments and playing techniques, such that simply “playing percussion” instead becomes “creating sound” by any appropriate means. Besides his work for Fontys, Marcel currently performs with several ensembles, including Champ d’Action (in Belgium), Slagwerk Den Haag, and the Eef van Breen Group (in the Netherlands). 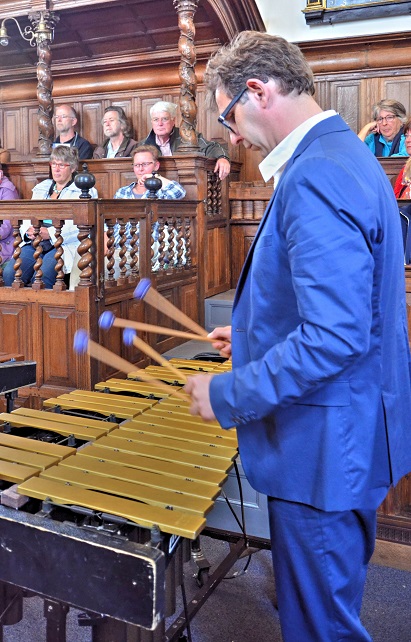