A figure of the young generation of classical guitarists, Johan Fostier holds four international contests first prizes (among which the prestigious Guitar Foundation of America Contest 2001) and won many others. He has already recorded two solo CDS, two with the Take Four Guitar Quartet and, more recently, one with Belgian soprano Evelyne Bohen (Almaviva Duo). He also performs with French guitarist Delphine Bertrand, flautist Sandrine Desmet and with cellist Stijn Kuppens ( duo and string quintet). He performed as a soloist with the National Orchestra of Belgium, the Moscow Philharmonic Orchestra (in the prestigious Tchaikovski Hall), the Orchestre Philharmonique de Liège, Chamber Orchestra Kremlin, the Kaliningrad Philharmonic Orchestra, the Royal Chamber Orchestra of Wallonia, the Orchestre du Conservatoire de Bruxelles, Prima la Musica, The Brabant Orchestra, the Neubrandenburg Philharmonic orchestra, and gave recitals throughout Belgium, Germany, the Netherlands (among others at the Concertgebouw in Amsterdam), in France, in Italy, in Russia and gave a tour of 40 concerts through the United States and Canada. He also took part in radio broadcasts in Belgium, in the United States and in Canada. He created "Platero y yo"(Jiménez, Castelnuovo-Tedesco) together with comedian Vincent Dujardin in Belgium and also the "Plaisir des Sens" show with comedian Catherine Lambrecht. He is regularly called upon to play the Romancero Gitano for choir and guitar by Mario Castelnuovo-Tedesco. Holder of a diploma from the Brussels Royal Conservatoire of Music in guitar (Diplome Superieur summa cum laude), and chamber music (Diplome Superieur cum laude), Johan Fostier studied further first at the Ecole Normale Supérieure de Musique in Paris where he attended the teaching of Alberto Ponce and where he obtained the Performer Diploma and the Concertist Diploma with the jury's congratulations, and afterwards at the Conservatoire of Fribourg (Switzerland) with Joaquim Freire where he was awarded the Diploma of Virtuosity summa cum laude and with the jury's congratulations in 2001. He has also studied during international training periods with Eduardo Isaac, Nigel North, David Starobin , and has attended masterclasses by Manuel Barrueco and David Russel. His musical thinking has been especially marked by his meeting with the musician, teacher and director Guy Van Waas and with superb guitarist Susan Mebes with whom he perfected his art. Johan Fostier teaches at university level at the Fontys School of Fine and Performing Arts, and the Royal Conservatoire of Ghent, and also at the Music Academy in Forest (Belgium). He is regularly approached to give masterclasses in Europe, Russia and at universities and festivals across the Atlantic. Spanish composer Mariano Ferrández dedicated his "Tres piezas para guitarra" to Johan Fostier. 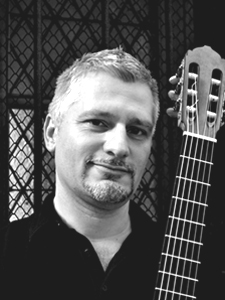