Ernestine Stoop was born in Utrecht, and began studying harp at the age of eleven with Titia Tieman-van der Laars. She earned her solo diploma in 1980, studying with Edward Witsenburg at the Sweelinck Conservatorium in Amsterdam. She then studied for two years with the legendary harpist Pierre Jamet, who was the leading authority on the works of Claude Debussy, and who worked with the composer himself on the pieces written for harp. Ernestine also studied chamber music in Salzburg with the violinist Sandor Végh.

After playing for 11 years with the Radio Philharmonic Orchestra, Ernestine is now focusing on her career as a soloist, chamber musician (with HarpDuo Rave and Trio Janacek), and teacher. She is also a member of the Nieuw Ensemble, Atlas Ensemble, and Asko|Schönberg.

She is the harp-professor at the Royal College of Music in the Hague, and at the Fontys Hogeschool voor de Kunsten in Tilburg. As a soloist, Ernestine has performed with such conductors as Hans Vonk, Ernest Bour, Jean-Jacques Kantorow, David Porcelijn, Ed Spanjaard, Reinbert de Leeuw, Rogier van Otterloo, and James Last. She has recorded classical as well as contemporary music. In addition, she has worked closely with with well-known artists like Mathile Santing and Toots Tielemans, and participated in theater- and film productions (e.g. with the Malinese Kora player Toumani Diabate). She has also enjoyed numerous, productive sessions with such composers as Mauricio Kagel, Isang Yun, Stockhausen, Elliott Carter, Louis Andriessen, Franco Donatoni, Unsuk Chin, Tan Dun, Guo Wenjing, Theo Loevendie, and Guus Janssen, preparing their compositions for world-premier performances.

Ernestine initiated the 3rd and 5th European Harp Symposia (1995 and 2001) in Amsterdam, and gave the first performance of Guo Wenjing’s ​Concerto for H​ arp and Lyric Soprano in Amsterdam in 2001. She was also the artistic director of the prestigious 10th World Harp Congress, which took place in 2008 in the MuziekGebouw aan ‘t IJ, Amsterdam. In addition, she is Officer of the Board of the World Harp Congress, Inc. Recently, Ernestine has had built for herself a Carillo harp. This is a unique 16th-tone instrument designed by Juan Carrillo, a Mexican composer of the early 20th century.

Ernestine’s last CD was released in 2012 and was very enthusiastically received. The CD ​includes the whole cycle, ​Miroirs, by Maurice Ravel, whose music Ernestine adapted for two harps. She has also arrang​ ed ​On an Overgrown Path by Leos Janacek for flute/alto flute, harp, and cello. 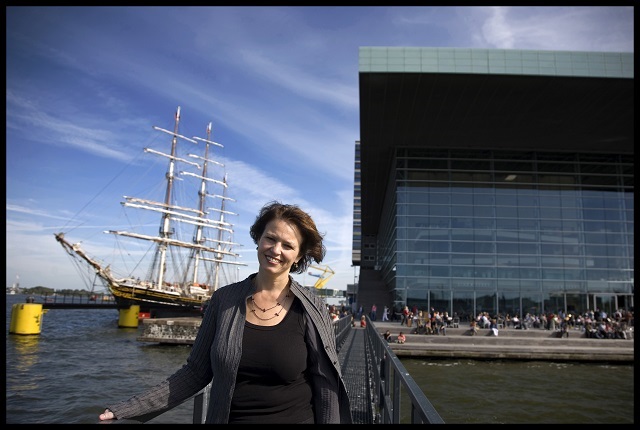